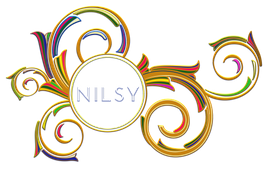 Nilsy’s is a continental Sinatra who drank too many espressos, spent some late nights with the Pet Shop Boys and partied with Robbie Williams and France Gall. (Nilsy hasn’t actually done any of these things, he doesn’t even like coffee, but the above describes his vibe.)

He is a modern day pop crooner, a storyteller, a music maker and a showman. Nilsy’s music makes the heart listen and the body pulsate. His music is nuanced bombastic baroque pop filled with escapism and dreams of la belle vie.

Nilsy is from Stockholm and is very much European. Both Nilsy and his music are heavily influenced by his childhood in Paris, his training in London and his time spent chilling in NYC and writing in Tuscany. For the time being he’s mainly found roaming the streets of Brighton and Stockholm.

With a career spanning musical theatre, opera and film scoring he is now launching his much anticipated Pop Career. He studied musical theatre at the Royal Academy of Music in London, classical singing at The Royal College of Music in Stockholm and has performed opera, musical theatre, swing and jazz. Alongside these rather more classical genres he has been secretly focussing on his passion - Pop Music.

Nilsy’s music is quite far away from the spartan, “cool” style that is ubiquitous with Scandinavian pop, he is much more influenced by the overt optimism and rawness of 90s Britpop, the dreamy indulgence of Juliette Gréco, the chamber pop style of The Divine Comedy, the disco beats of The Pet Shop Boys and the story telling techniques of Mika.

Nilsy is currently mixing and mastering a series of songs which will be released over the coming year, filling your ears with funky, romantic and quirky tunes.